The Tempus Fugit word clock displays the time using the ’12 hour’ format in words spelt out on an 8 by 8 letter matrix, time is displayed in 5 minute 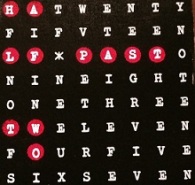 slots [5,10,15,20 …]. The correct time is maintained when the unit is not powered by an on-board battery backed RTC chip.

With an 8 x 8 matrix there obviously have to be some compromises, for instance ‘HALF’ and  ‘TWO’;

Three rear mounted pushes allow the time to set and adjusted as needed. Instructions will also be included on how to optionally set the TF time via a connected PC.

In normal operation the TF does not need to be connected to the internet or a host computer.

Operating and build Instructions for Kit TF can downloaded from my TF Wordclock GitHub Insturctions supplied as a download.

The finished printed circuit board size will be about 112mm x 70mm, it could have been little shorter but with these dimensions the length to width ratio works out to 1.6 which is often referred to a ‘Golden Triangle’ –  considered by many artists and architects to be the most aesthetically pleasing form of a rectangle, so I decided to stick with it.

With the exception of the display and Pi Zero / Arduino most other components are mounted on the rear of the board, – Pi / Arduino could have gone on the back but why hide a thing of beauty !

Built and Kit options include a simple acrylic English letter overlays. Other font options can be easily created from the down loadable templates. Non proportional font like Courier work the best

The Nano clones use a CH340 USB to Serial chip, I have found they work ‘out of the box’ with window 8.1 /10 and with a Pi3 running the latest Raspbian [as of April 2016]. You may need to install additional drivers with Macs and earlier versions of Windows.

What is not included