You can easily use your Pi as a programming interface for micro:bit. The following assume you are running Rasbian and have been tested with the April 17 s/w release.

The 2 options described here are;

The mbed platform is stable and really responsive on a P3, using Chrome. 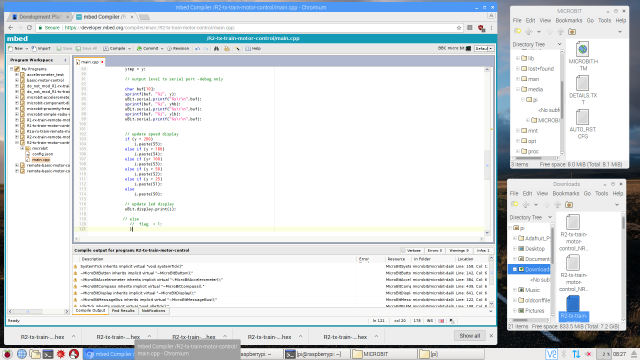 The  micro:bit has a built in capability to send data to a ‘virtual’ serial port, this is very useful for debugging your code. Again you can use this capability easily with a Raspberry Pi 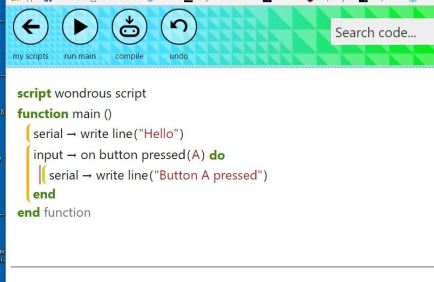 – remembering to change the ‘ACM0’ to match the result from dmesg test
– also the micro:bit is configured for 115200 baud operation minicom seems to default to this but you can check with the ‘-s’  option

You can use the ‘mu’ tool to program your micro:bit in MicroPython, the big advantage of the mu tool over the webbased tools is that you can use it ‘offline’.

The quickest way to install mu on a raspberry Pi,  is to type the following from a terminal window

However currently the version in the Rasbian respository is somewhat out of date. This is not a problem if you are just trying it out, but some command ( radio and speech ) are not supported. You can get the latest version from the mu github site. There are various instructions on web on how to install it, this worked for me ..

As of 20/8/17 the latest Stretch update for the RPi is still loading a very old version of mu. to get the latest version follow the instructions above with the additional extra bit below

I am not sure all are needed but it worked for me !

I am guessing it breaks a few rules but I found the following also works !

Once installed start mu from a terminal window, the interface is easy to use, simply plug in your micro:bit into one of the USB ports and get coding.  For details on the micro:bit implementation of MicroPython see this link

The main area I had to get used to was the error handling. If MicroPython encounters an error it will scroll a message across the LEDs advising the line number the error is in.

An Multi-media Toolkit for Museums, Visitor Centres and more running on the Raspberry Pi

My adventures with the Raspberry Pi, Arduino and BBC micro:bit

My adventures with the Raspberry Pi, Arduino and BBC micro:bit