Back to work tomorrow, but happy as I have managed to finish my Christmas Pi 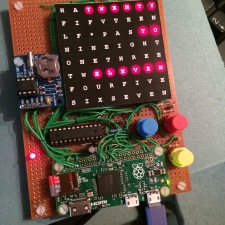 project – a ‘word clock’ using a single a 8×8 matrix display and a PiZero.

I used a MAX7219 to simplify driving the LED matrix, this connects to the PiZero via the SPI port and uses a library developed by  Richard Hull to program it in Python. The character layout came from an article in the Guardian.

with a blog post from RasPi.TV providing some additional help !

The biggest pain was trying to get my head around the concept of a ‘common anode’ and ‘common cathode’ matrix display. The MAX7219 is nominally designed to drive common cathode 7 segment displays, which is fine but with an LED matrix life is a bit more confusing as by swapping the columns and rows around you can drive either sort of 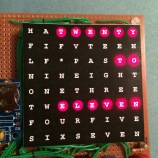 display with the 7219. To make matters worse matrix displays often do not have a clear marker for pin 1. Having wired everything back to front on the first attempt I found the following article on an Arduino website which was a great help  – Identifying pin 1 on 8×8 displays .

The final hardware elements are an RTC and some push buttons so the time can be set without the need for an internet connection. This proved harder

than expected as there seems to be a problem with the latest Kernel overwriting the RTC during the boot process, I think I have found a workaround but this does need a bit more work.

The character overlay is simply printed from a table in MS Word with the letter colour set to white with a black fill.  I experimented with a  number of different fonts, the ones which work best are non-proportional ones like Courier and Monaco. 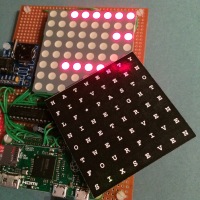 All in all great fun