A couple of weeks ago my wife arrived back from Lindengate a local mental health gardening charity she volunteers at with an old PC monitor and asked if I could set it up to continuously display a series of videos, she had created to highlight the charities work. Typically the when was the following week and the where was a local doctors surgery. The when meant I was limited to ‘in stock’ parts and the where meant untended operation in a public place. I knew there were various existing instructions for doing this sort of thing with a Raspberry Pi and after a bit of internet searching found an article for a video looper on the Adafruit website which simply automatically plays video files from memory stick  inserted into one of the Pi’s USB sockets. I tried this out on a Pi3 and it ticked all the boxes in terms of play back and ease of use, so that was the s/w sorted.

Looking at where display was going  it needed not only to start-up without the user having to do anything but also not look too much like a DIY project built out of parts from my garage one night !  To get the size down I moved to a Pi Zero, with a VGA converter dongle [VGA being the only input available on the monitor] and a short micro USB to ‘type A’ converter lead. This all worked fine but did leave the perennial problem of how to safely turn the Pi off. Given a keyboard or VNC connection was out of the question I opted to fit a on/off switch to the Reset / run connector on the Pi. This way we could include a clear instruction to set this switch before removing the power. Now on paper I know this is not the best way to power down a Pi but in practice I have found it does seem to avoid corrupting the SD card.

Once tested this was all packaged in a small box  left over from another project. This I was able to mount on to the back of the monitor using one of the VESA mounting points on the back of the screen. The end result looked really quite professional with no unnecessary bits of wire hanging out ! 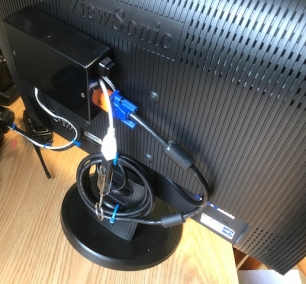 So far the display has been put to good use in the doctors surgery and at the charities Autumn fair. The total parts cost excluding the monitor was around £32 using a Zero 1.3

This entry was posted in Uncategorized and tagged @adafruit, PiZero, raspberrypi. Bookmark the permalink.

1 Response to Standalone Video display with a Raspberry Pi